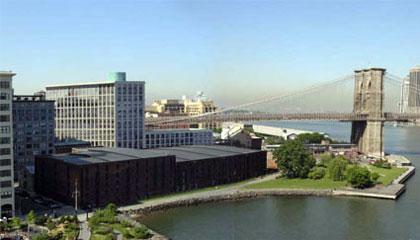 Community Board 2 held a public hearing last night regarding the Dock Street DUMBO Project which promises affordable housing a middle school to be constructed near the Brooklyn Bridge.

Update: This dispatch just in from CB2:

Please be advised that the Youth, Education and Cultural Affairs Committee meeting – originally planned to follow the community board’s public hearing last night on the “Dock Street DUMBO” mixed-use development project – has been re-scheduled for 6:00 p.m. tonight, Thursday, December 18, 2008, in Room 119 of the Health Sciences Center of Long Island University, DeKalb and Hudson avenues.
The Land Use Committee meeting also planned to follow the public hearing has not yet been re-scheduled.

BHB commenter “Observer/Participant” was there and comments:

The hired guns were all on display, from the laser pointing architect (who did her best to show the building from the middle of the East River, and hiding the obvious obstructions to the bridge, to the rent-a-lobbyist/lawyer, to all the people that the Walentas family has tossed scraps to over the years (e.g. merchants getting sweetheart commercial rent to make real estate values increase in DUMBO, to clergy). The bureaucrat representing the City DOE was remarkably vague with figures, plans, specifics when pressed. Only that they are for “it”–whatever “it” eventually turns out to be.

The Brooklyn Paper reports that the meeting was “crowded”. There were so many people there to voice their opinions, the paper says, that the Board didn’t have time to vote on the project.  The paper reports that 38 people spoke for the proposal while 49 were opposed.

CB2’s Robert Perris tells BHB that number reflects those “who signed in and indicated a position”.  He added that he did not count the number of people who spoke.   The date and time of the postponed Land Use and Youth, Education and Cultural Affairs committee meetings has not been decided says Perris.

Brooklyn Paper: Vote Is…: “This project is not about our need for a middle school — that is the distraction,” said City Council candidate Ken Diamondstone, who opposes the project. “It is about a wealthy developer who wants to ignore and compromise our valuable icon.”

But supporters argued that the area desperately needs a middle school, affordable housing, and noted that Walentas could build a much taller hotel — without needing public approval — in the same spot.

“This is not Atlantic Yards,” said Councilwoman Letitia James (D-Fort Greene). “This is a project that I believe will go a long way in Downtown Brooklyn, and will preserve its nature.”