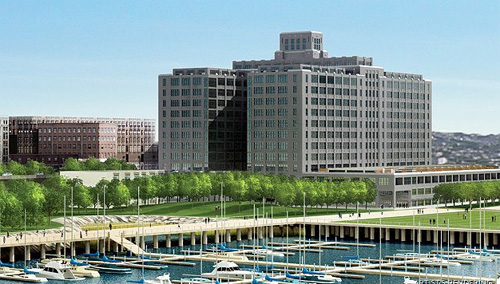 Brooklyn Papers reports that the Brooklyn State Supreme Court has ruled against nabe opponents of the development of Brooklyn Bridge Park.

Brooklyn Papers: Brooklyn Bridge "Park" Opponents Lose Lawsuit: In a 22-page decision handed down Tuesday, Brooklyn State Supreme Court Justice Lawrence Knipel dismissed the opponents’ charge that the Empire State Development Corporation broke the law when it added shops, restaurants, a hotel and 1,210 condos to a plan for a 1.3-mile public park stretching 1.3 miles along the waterfront from the Manhattan Bridge to the foot of Atlantic Avenue.

The state says it needs private development to generate $15 million annually to pay for upkeep of the development’s 77-acres.

The ruling is not unexpected. At a pre-trial hearing in August Knipel had questioned the legal merits of the suit.

“I can see policy reasons for not putting these buildings next to a park. But why legally?” he asked.

In Tuesday’s decision, Knipel also dismissed the claim that the state’s plan didn’t take a “a hard look” at the impact the new residential development would have on traffic and infrastructure in the area.

Judi Francis, one of several Brooklyn Heights residents who filed the suit, said Tuesday that she planned to appeal.

“As we have said from the beginning the critical fight is in the appellate division is sitting in Brooklyn a few blocks away from this site — the so-called ‘park’,” she said.

Welcome to the Nabe: Sean T. Conrad
The Master Watchmaker of Brooklyn Heights