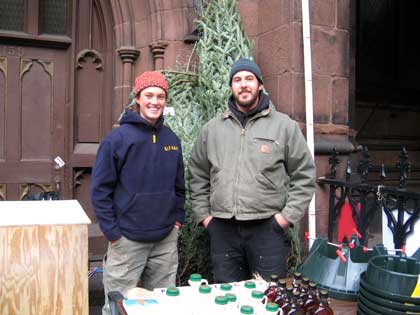 There are different ways of reckoning the onset of what we call “the Holidays”. Traditionally, Christians have dated them from the beginning of the liturgical season of Advent, while a more secular, commercial orientation has them starting with what has unfortunately, but alas accurately, come to be called “Black Friday.” For me, as a Heights resident, however, the Holiday season begins on “tree day”, when Brianna Parke and Bill Dallmeyer arrive from Vermont with their selection of trees, which they display along the sidewalk on Montague Street next to St. Ann & the Holy Trinity Church. The trees come from Brianna’s father’s farm, Adam’s Vermont Balsam, at Barton, Vermont, and from a neighbor’s farm. As can be seen in the photo, Bill and Brianna, who arrived here yesterday, also sell pure Vermont maple syrup. They will be here until Christmas eve.

Update: reader Janet helpfully provides a link to Brianna’s dad’s blog. Note on the blog that trees are also sold at locations in Cobble Hill, Park Slope, and Clinton Hill.