The MTA and New York City Department of Transportation have established three routes for bus bridge service and bus priority lanes from three Brooklyn locations to Midtown Manhattan. Starting at 6 a.m., and operating 24 hours a day until further notice, shuttle buses will travel to and from subway stations at Atlantic Avenue, Jay Street and Hewes Street.

The Atlantic Avenue and Jay Street routes will operate via a new, two-way bus lane across the Manhattan Bridge and into Manhattan via bus-priority lanes on Bowery and 3rd Avenue, making stops at major cross streets up to 55th Street in the inbound direction, and via bus-priority lanes on Lexington Avenue, 23rd Street, and 3rd Avenue and Bowery in the outbound direction.

The shuttle bus from Hewes Street will operate over the Williamsburg Bridge and Delancey Street, then via Bowery and 3rd Avenue up to 55th Street before returning downtown via Lexington Avenue, 23rd Street, 3rd Avenue and Bowery.

Thursday’s limited service at the Barclays Center location was apparently a grand fiasco, according to Gothamist, as seen in the pic above and below. Read more here. 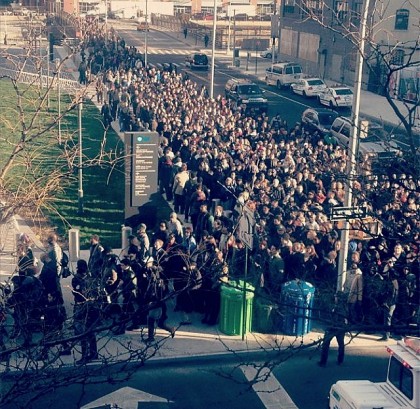 Truth In Signs?
So, What’s On This Weekend?