Dellarocco’s Of Brooklyn At Hicks & Montague: Open For Biz Tuesday

At last! Dellarocco’s of Brooklyn, the new local brick-oven eatery at 214 Hicks Street, one door south of Montague, is set to open for business Tuesday, July 31. The eatery held a soft opening Friday, featuring pizzas cooked in its wood-burning brick oven imported from Italy, which were oh so delectably light & tasty. The restaurant also features a wine & beer cafe, offering local Brooklyn brews. And for dessert: hand-made cannoli.

Update: Our man Karl was on hand with his cam. Video, as well as more text and photos, after the jump.

Dellarocco’s is owned & operated by Brooklyn-bred brothers Greg and Glenn Markman and Joseph Secondino (who has known the bros for 30+ years). The three are also partners of the Heights Cafe next door at 84 Montague Street. Dellarocco’s has a separate kitchen and operates as an independent biz. (See photos below.)

The tasteful boutique-style dining room boasts 15-foot ceilings, with a menu specializing in personal pizzas. It is open seven days a week, from noon to midnight. As you might guess from the image, delivery is also available. (Photos: Chuck Taylor)

Hopeful signs of success for the local eatery. 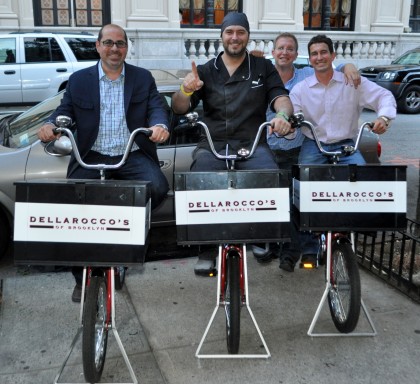 The owners with Chef Pasquale Cozzolino in center.