When the condo project at 20 Henry Street hit the marketplace in February after years of delays & drama, asking prices at the former Peaks Mason Mints building (known as the Candy Factory) were between $450,000 and $2.56 million. That comprised studios up to 4 bedrooms, including 24 lofts (among them, six $2M+ penthouse units) and an additional 14 units in the adjacent modern structure on Poplar Street scheduled to wrap this summer.

Brokerage Stribling & Associates claimed then that 20 Henry had an 800-applicant waiting list—and it turns out they weren’t sugar-coating the building’s appeal. Brownstoner now reports that it is two-thirds sold, with 25 of 38 units spoken for.

Among them, four of the six penthouses are in contract. The largest and most expensive unit in the building, a 4-bedroom in the original factory building, is priced at $2,895,000. Closings should begin later this summer.

More history on the well-traveled build-out was featured in a Wall Street Journal article in February: The former industrial space was built in 1885 as the base of candy makers Mason Mints & Mason Dots. In the 1970s, it became housing for artists under the state’s Mitchell-Lama subsidized-housing program until the program ended in 2004.

Developers Urban Realty Partners bought the site in 2007, but weren’t able to finish a condo conversion after the imminent economic collapse. Los Angeles-based Canyon-Johnson Urban Fund stepped in and took over the project in 2010, alongside plenty of legal drama… 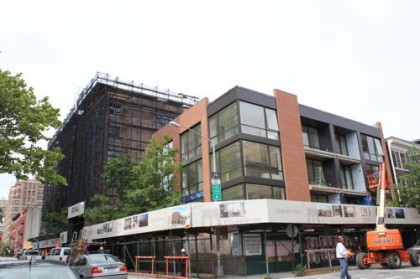