I Want Candy? 20 Henry Condos At Last Hit The Market

The condo project at 20 Henry Street is at last hitting the marketplace after years of delays. Final polishes are taking place at the former Peaks Mason Mints building, known as the Candy Factory, with asking prices between $450,000 and $2.56 million for studios up to 4 bedrooms. The building includes 24 lofts (six of them penthouse units, at $2+ million), with an additional 14 units in an adjacent modern structure on Poplar Street scheduled to wrap by summer.

An article in today’s Wall Street Journal reminds us of the building’s history: The former industrial space was built in 1885 as the base of candy makers Mason Mints and Mason Dots. In the 1970s, it became housing for artists under the state’s Mitchell-Lama subsidized-housing program.

Artists lived in studios there until the program ended in 2004. Developers Urban Realty Partners bought the site in 2007, but weren’t able to finish a conversion to condos after the imminent financial crisis. Los Angeles-based Canyon-Johnson Urban Fund stepped in and took over the project in 2010, alongside plenty of legal drama.

When plans were first announced that the factory was slated to become a condo development, the Brooklyn Heights Assn. wanted 20 Henry’s garden to remain open space, the WSJ adds—which is now the site of the new 14-unit modern building. BHA executive director Judy Stanton says she still prefers the garden to the new building, but is glad the factory is finally ready for new homeowners: “I’m sure it will attract families.”

Brokerage firm Stribling & Associates is marketing the project, and says that 20 Henry St. already has an 800-applicant waiting list. 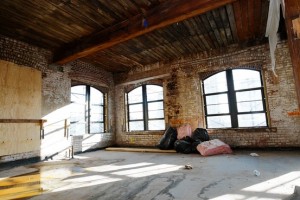 Downtown Skyscraper District: He Said/He Said On Landmarks Approval
TONIGHT! Preview of Heather Quinlan’s If These Knishes Could Talk