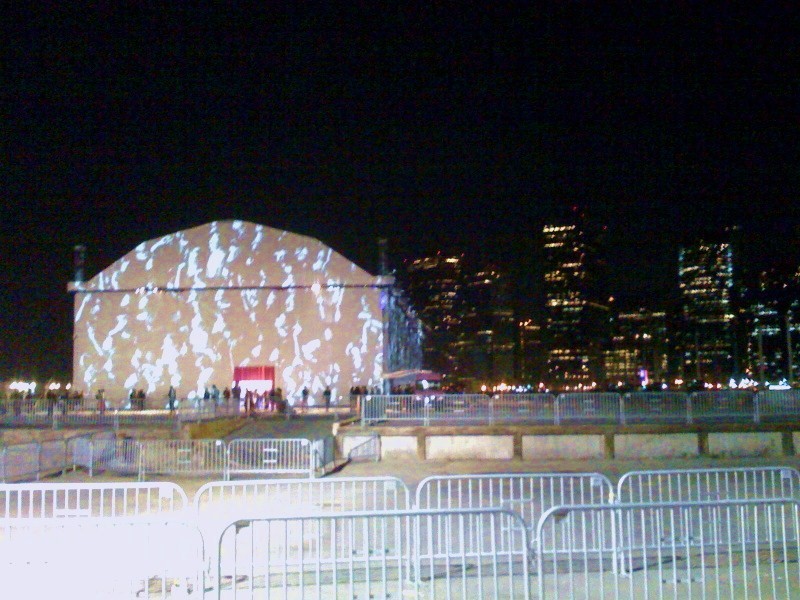 The Finks have just returned from what was a surprisingly well organized and enjoyable evening at Saturday night’s Diesel Rock n Roll Circus on Pier 3.  Joining 17 host cities including Tokyo, Milan, London and Paris, Brooklyn Heights  hosted the finale of the jean company’s world wide day of concerts celebrating its 30th anniversary.

The crowd and its artists reflected a sophisticated, multiculti talented group befitting of its Brooklyn Heights location.  In addition to some of the brightest musical talents of our times ranging from Scotland’s Franz Ferdinand to Britain/Sri Lanka’s  M.I.A. (who despite no official announcement is very pregnant) – those in attendance were also entertained by acrobats, contortionists and fire eaters while filling up on free circus food and adult beverages.

Even the tent itself made a creative and enthralling statement with different projections changing its outside appearance minute to minute. We only hope this is just the beginning of Brooklyn Heights being seen as a location for more cultural events such as tonight’s show.

And finally, kudos to the FDNY and NYPD for their outstanding effort in insuring that the event stayed safe and fun.  Once again they’ve proved they are not only New York’s Finest and Bravest but the World’s as well.

Check out our Kyte.tv feed here.