The new Starbucks location at 134 Montague Street opens for business Saturday May 12, as the windows at the previous store at 112 Montague were covered in brown paper Friday night, with an arrow pointing up the street.

As previously reported, the new space at the former Nine West shoe store will sacrifice major window vistas along the front, although the folks at Heights Vision next door told BHB that it is deeper and offers more square footage. Here’s a first look inside the new store.

Starbucks decided to relocate because the one-story building at 112 Montague was a constant source of roof leaks and plumbing issues. Its new destination at 134 Montague has been completely gutted and rebuilt, including the residential above. 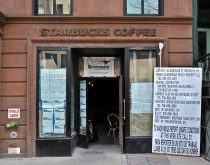