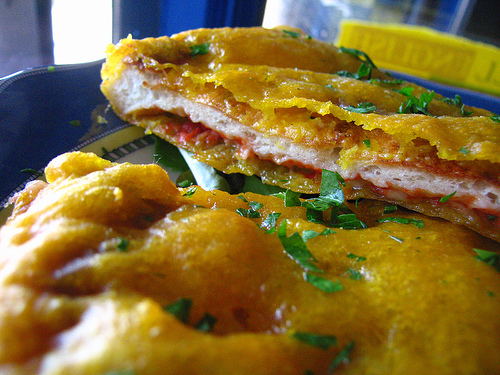 Slice: Deep-Fried Pizza: Yes, that's right. Deep-fried pizza, long the exclusive domain of the Scots, has landed Stateside. Slice noticed it on the menu of the Atlantic ChipShop a little over a month ago. After some pestering on our part, chippie owner Chris Sell allowed me and Matt Jacobs into his kitchen to film the process. Matt shot the footage above while ChipShop kitchen manager Randy Carpenter fried up a couple slices for us…Deep-fried slices at the Brooklyn Heights restaurant are $3 each and begin their lives as plain pies from My Little Pizzeria on Court Street in Downtown Brooklyn.

We're all about Atlantic ChipShop, it's the official post-loss game eatery for Homer Fink's Brigate Bocce. We can eat tons of chicken curry, fish n' chips and meat pies — deep fried pizza, not so much. We did like the video Slice shot at ChipShop documenting the birth of a deep fried slice however.