William H. Macy stars along with David Mamet regular Joe Mantegna in an adaptation of the playwright's 1982 one act play, "Edmund". 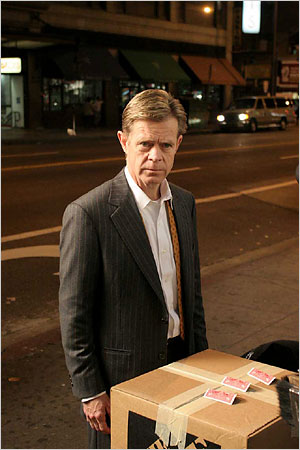 “Edmond,” adapted by Mr. Mamet, still wields a verbal tire iron. Its taunting insistence that everyone is racist, voiced in abrasive, staccato Mamet-speak, leaves you feeling battered and vaguely guilty. In the early 1980’s its epithets, aimed at women, gays and especially blacks, sounded like the playwright’s spit-in-your-face response to a climate of rigid political correctness, which has since softened. But even now they hurt.

The play, with its incendiary language and its merciless portrait of a 47-year-old nebbish who embraces his own worst nightmares of racial and sexual subjugation, is really a surreal spiritual fable that riffs on a notion voiced by Edmond that every fear hides a wish. Mr. Mamet shows no interest in offering a tidy psychological explanation for Edmond’s behavior. Hurled at you like a knife, the movie is as reasonable as a panic attack.

One caveat, the Hollywood Reporter warns that the R-rated "Edmund" is for "hardcore Mamet fans only".