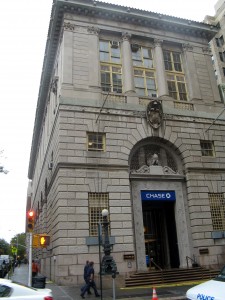 Yesterday’s seizure of Washington Mutual by federal bank regulators, and the subsequent purchase of its deposits by J.P. Morgan Chase, may mean that the space now occupied by WaMu’s branch at the corner of Montague and Henry will soon be vacated, as Chase has a much larger branch in the Brooklyn Trust Company Building, the magnificent Italianate palazzo (see photo) one block away at Montague and Clinton. As noted here before, Chase has sold that building, but remains as a tenant. It is also possible that Chase will move out of the Brooklyn Trust space and consolidate its operations in the former WaMu space. Both the exterior and interior of the Brooklyn Trust Building are landmarked, so there are stringent limitations on what can be done with it. If Chase leaves, its most likely successor would be another bank, although the owner may seek an adaptive re-use, as in the case of Trader Joe’s in the former Independence Bank space at Atlantic and Court. (Anyone been there for the Grand Opening yet?) One prospect, as pointed out by Dennis Holt in this Daily Eagle editorial, is that the building’s owner, Stahl Real Estate, may seek to build a residential tower above it, as it lies outside the Heights Historic District and therefore is not subject to the District’s height limitation.