The first time I met Allen, he bit me in the face.

His owners were humiliated and apologetic. I laughed and said, “I came on too strong. It’s my fault.” I lay down on the floor and asked them to tell me about their new dog, a Lab-terrier mix I had already deemed “Cutie-petutie.”

“We got him from the shelter,” Rachel told me. “They warned us he doesn’t like men and was probably abused but he’s so cute they thought maybe he’d be adopted. He liked me right away but was shy with Sam. When I came back from the restroom, he was lying at Sam’s feet and they were already old friends.”

As she told me this story, I tossed the occasional cookie, which got Allen’s interest. He began sniffing my feet, then my butt, gradually working up to my hair and, finally, my face. I rolled over on my back so that he towered over me. He looked me in the eye. I smiled. He sniffed my face and turned around twice before curling up against my chest. 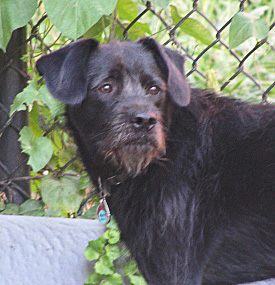 “See,” I explained, “Allen has to choose his own friends and he needs to know his friends aren’t a threat.”

Allen didn’t often get to go to the dog run. He was either the life of the party, taking off in great circling bursts that had all the other dogs chasing him, or Satan’s representative. I never knew which Allen would bust out.

The saving grace was that he weighs twenty-five pounds. When he was scared, and therefore vicious, I could pick him up. I’d already fallen in love with his intelligence but the first time I scooped him up so that Pickering could play with Uba and Allen went limp with trust in my arms, he became my walker and I was his. Not long after that incident, he began greeting me by rolling over for a belly rub, then hopping up to kiss me and hump my leg.

Winning the trust, and then the love, of a difficult dog is a dog walker’s badge of honor.

He respected Daisy, and was in love with Hermia. He kept an intelligent distance with Bangor, although walking them was a series of co-signing and triple-signing pees as threaded behind the other to have the last word. He bullied Pickering but I have the scratches on my thighs and left arm to prove that Pickering is not the pacifist he presents himself as. I was glad, in a way, to see Pickering fight back. Every dog should know he can protect himself.

That squabble took place the day Allen moved to the suburbs. I hauled him well away from Pickering and sat down with him. I explained that I know he’s jealous of other dogs wanting my love and that I understand. I’m jealous of lots of people and circumstances, too. I cried hard as I asked him not to forget me or forget how much I love him. He huddled close to the thigh he had just left a foot-long bruising scratch on and he listened. Allen always listened to me – to what I was worrying or thinking about, not just to commands or reassurances. Sometimes Daisy listens to me but my other dogs blithely carry on in the world I’m only there to take them to.

Rachel writes that Allen is having a good time trying to catch a particular backyard chipmunk and that suburbanite dogs don’t mingle. I know Allen is happy because he has Rachel and Sam; they’re his world.

But I miss talking to him.