Le Pain Quotidien: A ‘Sign’ Of Things To Come

It was back in January when we first caught a whiff of Le Pain Quotidien opening at 121 Montague Street in the long-deserted former location of Jennifer Convertibles. As of the first week of February, framing for new front windows was in the works and a month later promotions appeared in the windows.

Today, workers hung the banner signage for Le Pain Quotidien, while a construction crew member on-site shared with BHB that he was told the “bakery and communal table” is set to open for business in the next two to three weeks. That gives it a target of April 9-16.

If you can’t wait, take a look at Le Pain Quotidien’s menu here, which on its website says it offers “farm fresh produce, fragrant herbs, artisanal cheeses and, of course, our handmade organic breads.” In New York City, the locale has about 27 locations. 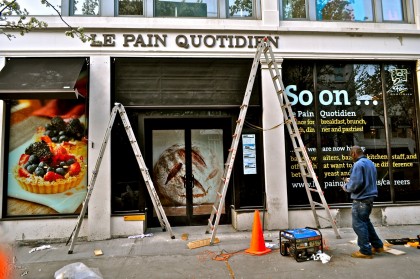