Sunday Stabbing At reBar in DUMBO

A man was assaulted with a knife and his assailant taken into custody shortly after 1:00 this morning at reBar, 147 Front Street, near Jay Streeet in DUMBO. The 25-year-old victim, whose left foot was bandaged, reportedly called 911 to report that he had been stabbed, while others held the perpetrator until police arrived. Detectives from the 84th Precinct took the suspect into custody. The victim was transported to Kings County Hospital in stable condition.

It is unclear what sparked the incident. Updates will be posted as they become available. 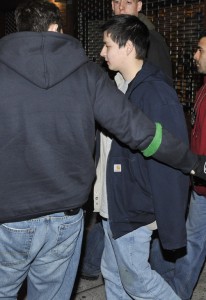 Suspect in custody at the scene. Photo by M. Hermann/BHB