Montague Street’s La Traviata To Be Replaced By… Another Eatery?

After La Traviata at 139 Montague Street shuttered in the middle of the night November 9, 2011, it would be logical enough to suspect the 30-year-old Italian eatery along Brooklyn Heights’ primary retail enclave will be replaced by 1) Montague’s eighth nail salon 2) T-Mobile, to join neighbors Verizon Wireless, Sprint and AT&T or 3) Generic Retail Chain XX.

But no, there’s actually a glimmer of hope. Passing by the joint Tuesday, a sign in the window says: “Attention Residents And Neighbors. RDR Bar & Restaurant Corp. plans to open a Tavern-Restaurant,” with a request for public comment with the Community Board Committee. The company is seeking a license to sell liquor, wine and beer.

A search for RDR doesn’t reveal a lot of info: The company is based in Middle Village, N.Y., as a “food and drink/restaurants” entity, so it appears locals will have to whet their appetites and wait to find out exactly what’s in store. But it appears clear Brooklyn Heights isn’t destined for Olive Garden or Taco Bell.

Meanwhile, Ralph Tommaso, the owner of La Traviata, told neighbors in November that he surrendered La Traviata between Henry and Clinton streets after “exorbitant rents” left him frustrated. Robert Fink, owner of the Heights Cleaners next door, told The Brooklyn Paper, “He just couldn’t take it anymore.”

However, Tommaso’s landlord, Carl Zerbo of Doraldo Holding Corp., insisted that rent wasn’t the issue: “Ralph just got tired of it. There’s never been an issue with the lease. I’ve always tried to be fair with him. That’s why he’s been on the block since the 1980s.”

And a footnote… or rather, a hand note: VIP Nails, the seventh salon set to open along Montague at 93, has posted a notice indicating it intends to open this month. 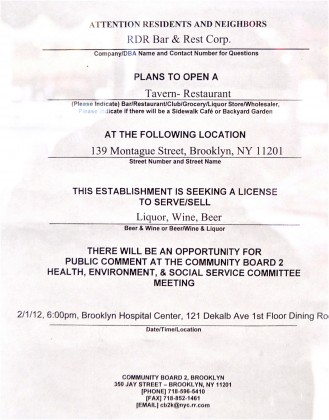