By Claude Scales on February 10, 2012 1:45 am in Arts and Entertainment, Celebrity Residents, Events, movies

Accordion music, knishes, and egg creams, along with our Heather Quinlan, greeted upwards of 100 guests at the Brooklyn Heights Cinema this evening to see a preview of Heather’s work-in-progress film If These Knishes Could Talk. Brooklyn Borough President Marty Markowitz was on hand to give a short talk on the Brooklyn accent, which he, naturally, considers the true American speech (never mind those people who say the real McCoy is found in Buffalo). He also described how one of the best kosher delis in Brooklyn has passed from Jewish to Italian to Egyptian Muslim hands, while remaining kosher. Marty was treated to a birthday knish with candles. 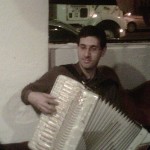 During a Q&A session after the screening, Heather was asked what she plans to add to the film. She said she hopes to travel to New Orleans to interview speakers of the Yat dialect, which is similar to “Brooklynese”, and to East London, to interview speakers of the Cockney dialect, which she sees as the closest British analogue to a New York accent.

Brooklyn Heights Cinema owner Kenn Lowy prompted enthusiastic applause at the close of the event when he announced that the Cinema will be around for some time, as the landlord has said he wants to do the right thing.