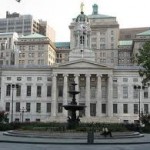 Despite vehement opposition from segments of the local real estate community, the downtown Brooklyn “Borough Hall Skyscraper District” is on track for approval by the New York City Council. On Tuesday, January 24, the plan offering landmark protection to 21 buildings that abut Brooklyn Heights, was given a go by the Council’s landmarks subcommittee, all but ensuring the entire Council will ratify it Feb. 1. (See BHB’s previous Jan. 19 post here.)

Key endorsements for the landmark designation—which runs along Court Street, from Montague four blocks south to Livingston—were voiced by the council’s Subcommittee on Planning, along with Councilman Stephen Levin, who represents the area.

In a joint statement with Councilman Brad Lander, who heads the subcommittee, Levin said, “After close consideration, we believe this new historic district will strengthen the character of Downtown Brooklyn, allowing for new development and growth like the new retail space planned for the Municipal Building [next to Borough Hall] while preserving the graceful, historic, early-generation skyscrapers that make it Brooklyn’s civic center.”

Lander and Levin added that they intend to ask the city to ease rules for storefronts and work with Livingston Street residents “without imposing hardships on co-operators.”

The district was first proposed to the Landmarks Preservation Commission in 2010 by the Brooklyn Heights Assn. and other preservation groups and since, has fostered snarky opposition from the Real Estate Board of New York (REBNY), Brooklyn Chamber of Commerce, Brooklyn Law School, Court-Livingston-Schermerhorn Business Improvement District and similar groups.

Once again, REBNY president Steven Spinola tore the initiative to pieces in a New York Post article today: “Not only is this an inappropriate use of landmark designation, but it will end up costing the city much-needed tax revenue and jobs. This is another case of the city landmarking away its economic future.” As well, in a direct mail campaign blanketing the neighborhood, REBNY claimed, “In these economic times, when every dollar counts, landmarking threatens to send Court Street back to the ‘bad old days’ of empty storefronts and dirty streets.”

City officials refute that the designation only sets guidelines overseen by Landmarks to ensure that construction blends with the neighborhood.