To be clear, Five Acre Farms is not a farm at all. There is no pastoral landscape where cows graze, no ever-present smell of manure percolating the air. There is no big red barn, no silo, no wooden sign on an oak tree announcing that Five Acre Farms is two miles down the road to the left. That’s because Dan Horan, the President and CEO of Five Acre Farms, lives on Montague Terrace, right here in Brooklyn Heights.

Around 15 years ago, Horan, who for more than a decade ran Papaya King and for more than two decades has owned Waldingfield Farm in Connecticut, started thinking about a company that would “bring the farmer’s market to the supermarket,” as he puts it, by making available to consumers the farm-fresh foods grown in their region at a reasonable price, 365 days of the year. In the Northeast, that includes items like apples, milk, eggs, and some vegetables. But Horan, who has an MBA, struggled with which of those would be the most marketable.

“It’s very hard to brand lettuce or eggplant,” Horan, whose own farm produces organic vegetables, told me recently after finishing lunch at Teresa’s on Montague Street. “There’s a lot of milk in the Northeast, and milk also economically presented a good option, because the farmers are in such distress.”

And so Horan, armed with an idea, years of experience in the food service industry (he was also a general manager at Gourmet Garage), and lots of agricultural know-how, started talking to dairy farmers located within 275 miles of New York City. He explained to them his idea, and promised that while Five Acre Farms would be the brand, their name and story would be front and center, too. 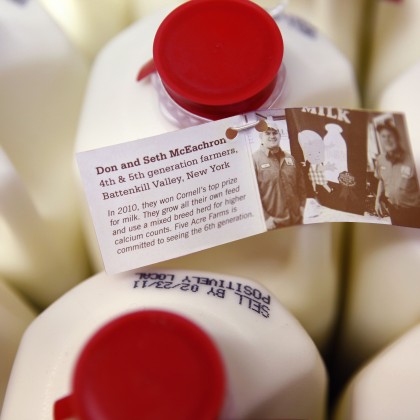 Obviously, Horan is interested in more than being Facebook for farmers. He is a businessman, after all, and one who is keenly aware that paying $3.99 for a half gallon of organic milk is offensive to many people. The milk offered by Five Acre Farms is not organic, but still costs $2.79 for a half gallon, around 80 cents higher than the average price for non-organic milk.

“There are a lot of farmers who aren’t organic, but do a lot of good things, and right now they don’t get any reward in the market,” Horan said, and highlighted the importance of knowing where things are from. “You can say you want fresh food, but that means you actually have to pay the farmer.”

He spent a lot of time meeting farmers and learning about their practices before deciding on Battenkill, whose milk, people tell him, “tastes like home.” It’s Grade A, pasteurized and homogenized, with no artificial or added hormones or antibiotics. Farmer Seth and Farmer Don grow all of their own feed, and last year won Cornell University’s top prize for milk in New York State. Regardless, convincing marketers that it’s worth shelling out the extra dough is an uphill battle.

“We want, when possible, for people to understand the impact they can have on buying local food,” he said, noting that Five Acre Farms milk, while not organic, is going from the farm to your fridge in just 36 hours. “But you can’t just be local for the sake of being local,” he stipulated. “It has to be vetted.”

Horan is willing to do the vetting, but for any skeptics out there, the story of Battenkill Valley Creamery, its farming practices, and why it’s not organic but still progressive is available on the Five Acre Farms website. So are answers to the questions “Why is your milk so inexpensive?” and “Why is your milk so expensive?”

“Transparency is something we talk about everyday,” Horan said, admitting he’s banking on it trumping all else. “We aren’t going to be perfect, and we may not satisfy somebody’s questions, and you have to be able to live with that.”

At present, Five Acre Farms offers milk in five forms: regular; reduced fat; fat free; half and half; and heavy cream. It’s available in more than 30 stores in the tri-state area (including the Key Foods on Montague Street and Union Market on Court Street), and Horan hopes to expand his line of goods soon to include eggs and apple juice from other local farms. Eventually, he believes his approach of taking products piecemeal from regional farms will be successful in other parts of the country too.

In his part of the country, which for the last 12 years has been Brooklyn Heights, Horan enjoys buying provisions at local favorite Sahadi’s, on Atlantic Avenue. “I love—I love—Sahadi’s,” he told me, adding that the raisins at the Oriental Pastry & Grocery across the street are “like olives.” On second thought, “They’re like golf balls.”

Who am I to argue with a professional opinion?

Warning Sirens Tomorrow? Don’t be Alarmed.
Sunday Sunset: A Gift From The Heavens