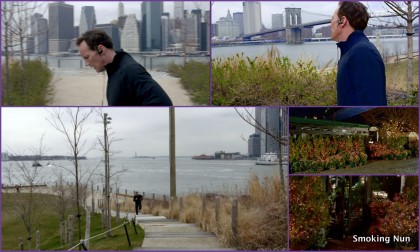 New Friday night CBS drama “A Gifted Man,” starring Patrick Wilson as a heartless neurosurgeon whose dead ex-wife returns as a ghost to egg him into becoming a do-gooder (also featuring newly minted Emmy winner Margo Martindale), shows numerous scenes of the good doctor on the fringes of Brooklyn Heights.

In the pilot episode that aired Sept. 23, we see Dr. Michael Holt jogging in Brooklyn Bridge Park, picking up dinner at the River Cafe and enduring a self-reflective moment at Fulton Landing.

The show garnered 9.3 million viewers for its premiere, the top-rated scripted program during the time period and among viewers 25-54, which is regarded as a “decent” opening. All the same, better tune in quick, considering that Williamsburg, BK-based ” Broke Girls,” also on CBS, drew 19.2 million viewers.

The House with a Thorn in its Side: Price Slashed Again at 70 Willow Street
Open Thread Wednesday 9/28/11