Area preservationists scored a long-awaited victory Tuesday as the Landmarks Preservation Commission unanimously approved the “Borough Hall Skyscraper Historic District,” a series of 21 historic highrises in Downtown Brooklyn, on the border of the Heights. 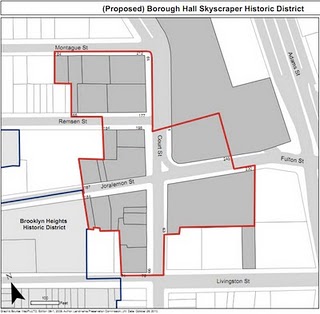 Clustered along Court Street and the corners of Joralemon, Remsen and Montague Streets around the already landmarked Borough Hall, the majority of Romanesque Revival and Beaux-Arts buildings were built in the late 19th and early 20th centuries.

Still, a number of property owners and developers raised sand over the designation, claiming it would drive up costs and impede retail redevelopment. Mike Slattery, SVP of the Real Estate Board of New York, actually said with a straight face that the highrises “have little architectural and historic significance and distinction.”

The landmarks designation has been in the works for five years, after nearby St. Francis College demolished its elegant 19th-century McGarry Library. “It has been a longstanding regret we did not get a district sooner,” said Brooklyn Heights Assn. president Judy Stanton. “(This) is necessary to protect those buildings from being torn down—it does not prevent redevelopment.”

Commission Chairman Robert B. Tierney noted in the press that “The cluster of tall office buildings that form the district had a central role in Brooklyn’s development and illustrate an important chapter of New York City’s history. These skyscrapers of their day gave Brooklyn not only a commercial heart, but also a new skyline.”

The newly designated buildings include the Franklin Building at 186 Remsen Street, completed in 1887; the 13-story Temple Bar Building at 44 Court Street; a 22-story limestone, granite and brick Colonial Revival style building at 32 Court Street; the 35-story Montague-Court Building; as well as three buildings of at least 30 stories along Court Street, once the borough’s definitive skyscraper row.

In addition, the 32-story coop at 75 Livingston Street is now landmarked, whose board was among those claiming its costs would skyrocket. Considering that the building boasts maintenance in the $3,000s, perhaps they accomplished that before Landmarks came calling.

The City Planning Commission and the City Council must grant final approval within the next 120 days.