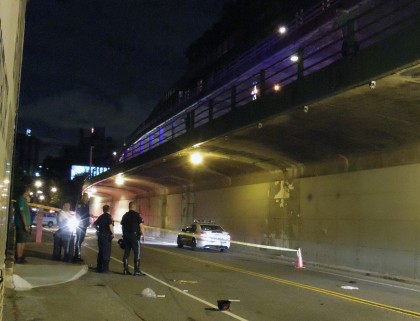 Police are investigating the circumstances surrounding an accident that occurred around 1:00 a.m. in the westbound lanes of the Brooklyn-Queens Expressway. Initial reports indicate that a motorcyclist was going at a high rate of speed when he lost control of the bike near the curve after the Columbia Heights overpass and was thrown over the guardrail to Furman St. below. Police and Fire Department units responded to the scene to treat the injured person who was transported to Lutheran Medical Center in serious condition. The NYPD Accident Investigation Squad was interviewing witnesses, including other motorcyclists, on the expressway.

Weekend Subway Diversions
A Night at Oh, My Pasta!