By Claude Scales on September 1, 2011 10:08 am in Arts and Entertainment, brooklyn bridge park, Events, movies, Music 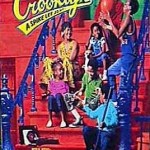 Word is in: Spike Lee himself will be present tonight at Pier 1, Brooklyn Bridge Park, to introduce Crooklyn, winner of the poll for last movie of the season in the Syfy Movies with a View series. DJ Emch will open the event at 6:00 p.m. with tunes from the Crooklyn soundtrack, followed by Spike’s remarks, followed by the movie, which will start at sundown.