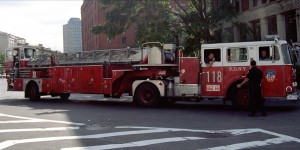 Ladder 118 on Old Fulton St. in 2000. Firefighter Scott Davidson, who died at the World Trade Center, is seen aboard the rig. Photo by M. Hermann

Today’s Daily News, as part of its “9/11: Ten Years Later” series, profiles Middagh Street’s Ladder Co. 118, which lost its entire crew during the World Trade Center attacks.  A two-page spread appears in the print edition, but it can also be found here.

Loss of Iris Cafe Sidewalk Seating Lamented
Hey! This is MY Slice