A Brooklyn Heights tipster wrote to Curbed this week about the new development at 20 Henry.  The tipster is not impressed: 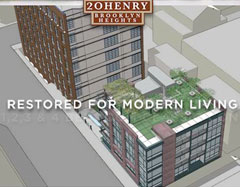 Curbed: A tipster has the scoopage on new Brooklyn Heights condo conversion 20 Henry (at 20 Henry Street, ‘natch), which was formally the Peaks Mason Mints building, constructed in 1929. The two-building setup has prices “slightly over $1,100/sqft,” we’re told, with common charges at about $1/sqft. Our tipster isn’t impressed, noting the absence of private outdoor space (except for penthouses), the elementary school across the way, the lack of a garage and “no views at most levels, unless you’re a gigantic off-ramp fan.” Which we are, thankyouverymuch. Here’s the website.

Update: DUMBONYC has floorplans of a few units at 20 Henry.