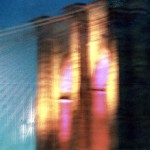 So the Brooklyn Bridge is celebrating the anniversary of its opening today, in low-key fashion. Back in 1983 though, the centenary was a big deal. Lots of fireworks, and the FDR Drive was closed to cars, so people could get a good view.

I was working as a messenger for a downtown law firm at the time and brought my camera and tripod in to work, to capture the evening’s festivities. Earlier that day, I was making my rounds in midtown, and as I was approaching Fifth Avenue, I noticed a blonde woman walking with her arms through those of the gentlemen on either side of her, crossing the street.

They turned to cross 55th street, and as they stood waiting for the light, no one seemed to recognize them. I tapped Paul on the shoulder.

“Mr McCartney?”, I said, as I tapped Paul on the shoulder.

“Yes?” he said, turning around.

“It’s a pleasure to meet you.”

“It’s a pleasure to meet you”, he said, shaking my hand.

I only remember two more things…how beautiful Linda was; I know everyone (including me) thought of her as ‘plain’, but up close, she had a real “Ivory Snow” beauty about her. I also remember running towards Madison Avenue, looking for a payphone. I found one in a parking garage. I called my dad in his office, and when he picked up, I screamed, “I just shook hands with Paul McCartney!” My parents owned a copy of Sgt. Pepper’s, in case the hippies broke the door in, but that was about the extent of their rock & roll knowledge.

Twenty-eight years later, still, every time I see a video of McCartney, I glance at his right hand. And no, no pictures. I didn’t want to schlep my camera around on my runs, so I had left it at the office. 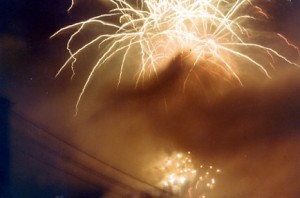