An associate of Mayor Low’s was Darwin R. James (Figure 183), father-in-law of Underwood Typewriter heiress Gladys Darwin James who advocated for the construction of the Brooklyn Heights Esplanade in the 1940s and endowed local uplift efforts. He helped organize the Brooklyn Bureau of Charities, the Association for Improving the Condition of the Poor and the Brooklyn Industrial School Association, and secretary of the New York Board of Trade and Transportation.

He was also an active Republican and served two terms in Congress. His major achievement in the House was blocking the passage of a bill to allow the free coinage of silver, a Democratic measure supported by western states intended to allow economic expansion and today little-remembered except for William Jennings Bryan’s “Cross of Gold” speech, in which he advocated for “free silver” as perpetual Democratic presidential candidate from 1896 until 1908.

A prominent wealthy resident who aided in this process was the Underwood Typewriter heiress Gladys Darwin James, who pointed out to Moses that the harbor view from the bluff was unparalleled and should be available to the public. She had married a son of Darwin R. James and they purchased the Alexander White house at 2 Pierrepont Place, where she lived for the rest of her life. Mr. James had given Moses his first job, so she had access and influence. To stabilize them and as investments, she purchased the A.A. Low house along with others on Columbia Heights and may have owned the Henry Pierrepont house at 1 Pierrepont Place. It is reported that she “traded” this site for the Promenade and playground.

Her father was typewriter manufacturer John Thomas Underwood (1857-1937). In Brooklyn, the Underwoods lived in a mansion at 336 Washington Avenue in what is now Clinton Hill but was then known simply as “The Hill”, which attracted many wealthy industrialists and merchants. The stately homes built by the Pratts, the Pfizers, and the Bedfords during this period included Underwood’s red brick and brownstone house, which sported a glass-enclosed greenhouse.

Underwood emigrated from London, England to America as a teenager in 1873. He joined his father in business in John Underwood & Company. Beginning in that year, they pioneered the manufacture of typewriter supplies, carbon paper, and other accessories to support the early machines which were first manufactured commercially by E. Remington & Sons. Underwood and his brother Frederick moved from New Jersey to Brooklyn a decade later. In 1895 he bought the patent to Franz X. Wagner’s invention of the “front-stroke” machine which, unlike previous models, enabled the typist to see what was being typed. The new Underwood typewriter revolutionized the industry. By 1915, the Underwood factory in Hartford, Connecticut, was the largest of its kind in the world. A state-of-the-art Underwood typewriter was featured in the 1939 New York World’s Fair to represent the “World of Tomorrow.”

Underwood’s widow and daughter, Mrs. Grace Underwood Barton and Mrs. Gladys Underwood Darwin James, donated the Clinton Hill mansion property to the City Parks Department in four parcels between 1951 and 1953, at which time the house and greenhouse were demolished to make room for a neighborhood park, called Underwood Park, which was named for its donors under a local law signed by Mayor Robert F. Wagner. It was opened to the public on May 30, 1956. 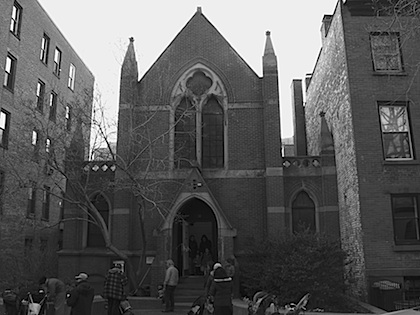 In 1961 the Willowtown neighborhood sought to develop a community center in the Unitarian Chapel with the assistance of Heights doyenne Gladys Darwin James and the chief executive of the Lincoln Savings Bank. The A.T. White Community Center opened in the former chapel in 1962 (the name was bestowed in 1967) which still houses the Heights Players, a well-respected amateur theatrical company. Other original tenants included the Brooklyn Heights Community Nursery School and the Roosa School of Music. The St. Ann’s School Preschool is a principal tenant. The auditorium was named The Kaufman Auditorium to honor the foundation that paid off the building’s mortgage not long after the community obtained control in 1962.

Does anyone have a picture of Mrs. James?

Reminder: Dance Party on Pier 1 Tonight
BHA to Residents: Maceo Will Tear the Roof Off the Mother Sucker Tonight at Pier 1