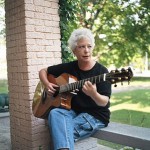 Janis Ian, veteran singer-songwriter and five time Grammy nominee who broke onto the pop charts in 1965 with “Society’s Child,” a widely-banned song on the then incendiary topic of interracial romance, and later had her biggest hit with “At Seventeen,” a chronicle of teen angst, will perform as part of the First Acoustics concert series at First Unitarian Church, corner of Pierrepont Street and Monroe Place, this Saturday, April 9, starting at 8:00 p.m. Tickets are $30.00 and can be purchased here. Video after the jump.