By Claude Scales on April 4, 2011 11:34 am in Architecture, Landmark Preservation, Real Estate

BHB has obtained clear copies of the renderings of the preliminary design submitted to the Landmarks Preservation Commission from architect Tom van den Bout. This design is in accordance with what he told BHB last month; that the building would be a “new brownstone” rather than, as Brownstoner puts it, “a mini-On Prospect Park.” (Drawing of how the new building will fit into the block just added, after the jump.)

This drawing shows the new building towering over 25 Cranberry, the small wooden house to its left, and slightly higher than 29 Cranberry to its right. The model does not show a fifth story, visible in the drawing, the front of which is recessed behind the cornice and evidently will not be visible from the street. 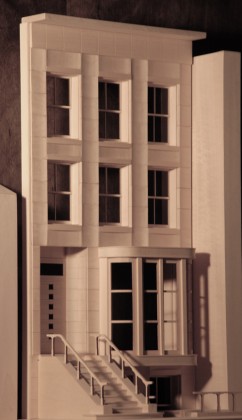