Ikea Sets Up in Cadman Plaza 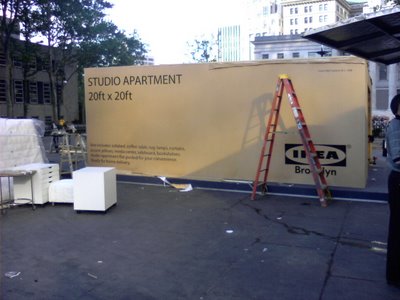 There’s a huge box with studio apartment tucked inside at Cadman Plaza courtesy of Ikea.  The Swedish furniture giant will be opening next Wednesday in Red Hook.  Racked explains it all:

Racked: Red Hook Ikea…: You knew it was coming: The massive marketing blitz to promote Ikea’s first New York City store will hit full-force beginning this Monday, June 9th. Per a press release, we learn that the Swedish furniture company will begin scattering twenty-foot pop-up IKEA room settings throughout the city. The temporary vignettes will be placed at “iconic sites” like Union Square (June 12th), Borough Hall plaza (June 9th), Brooklyn Public Library (June 13th) and Cadman Plaza (June 15th). But that’s not all! The store is also getting architect John Hobbs to build huge sculptures of local landmarks like the Empire State building and the Brooklyn Bridge out of Ikea cardboard boxes; those will be unveiled outside of the store on Beard Street on opening day. Of course, “guerilla” media tactics are also mentioned in the release—hopefully, they will in some way involve meatballs and preserved fish.

Photo by Lucien via McBrooklyn