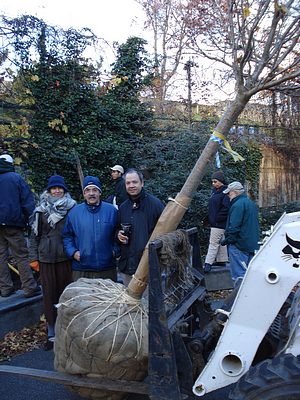 Wids De La Cour, left, and son Russell watch the unloading of the tree planted in memory of wife and mother Peggy

This in from Ben Bankson, president of the Willowtown Association:

A cherry tree was planted in the Palmetto Playground in Willowtown on Thursday, November 18, in memory of Margaret “Peggy” De La Cour by the Tree Trust of the city’s Department of Parks and Recreation. Peggy lived with her family just across from the playground at 27 State Street for 35 years and was a former president of the Willowtown Association that helped finance the planting.

Peggy died unexpectedly in February 2008 at age 63. She was a native of Brooklyn who earned a bachelor’s degree in history from the University of Pennsylvania in 1966 and a master’s degree in public administration from New York University in 1984. She worked in senior positions at the city’s Department of Environmental Protection, the Water Board and the office of the Brooklyn Borough president.

Those present at the tree planting included Peggy’s husband Willis “Wids” De La Cour and their son Russell. They and other members of the family invite Willowtown neighbors to come to the Palmetto Playground on Saturday morning, December 4, at 10 o’clock for a follow-up gathering at the tree and a light brunch and to help plant spring bulbs. Those wanting to do bulb planting are asked to bring gardening gloves and trowels.

Bob Stone of 23 State Street oversaw arrangements for “Peggy’s tree” with the Tree Trust and in consultation with the De La Cour family.