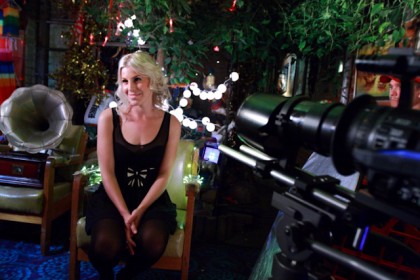 Australian singer/songwriter Coby Grant is our latest guest on Brooklyn Bugle Sessions.  She’s in town for the big CMJ confab and will be playing live tonight (10/28) at the Rockwood Music Hall [196 Allen Street (between Houston and Stanton)].

In “honor” of Halloween, Coby performs “A Song About Me”  near the infamous “gates of Hell” at 10 Montague Terrace featured in 1977’s  horror masterpiece The Sentinel. Video after the jump.

Also featured in the clip is  a cameo by the King of all Food Tour Guides Famous Fat Dave, who coincidentally was showing some Aussies around Brooklyn while we were shooting.