By Caitlin Heikkila on October 19, 2010 9:28 am in Arts and Entertainment, Brooklyn Heights, Events 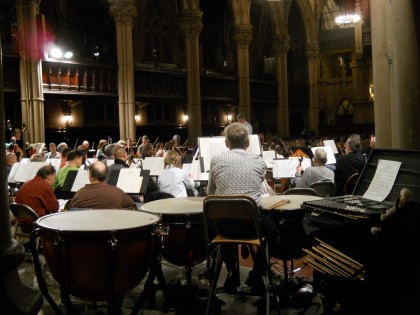 The Brooklyn Symphony Orchestra (BSO), a 65-person music ensemble, will be performing their first show of the season on Sunday October 31st at 3pm. The Halloween performance is the first of five, stretching all the way to June. All shows take place at St. Ann’s Church on the corner of Montague and Clinton Streets. The orchestra asks for a $15 donation, but it is not required.

Going into his 14th season as a conductor with BSO, Nicholas Armstrong claims conducting is the “best thing he does.” He’s also a violist and the Artistic Director at Poly Prep County Day School, but loves spending time with the group.

“After being exhausted all week at work. We come together and make beautiful music.” Armstrong said.  Each week, the orchestra comes together to practice on Monday nights from 7:30 to 10pm, playing a selection of classical, romantic 20th century pieces. While most of the music is instrumental, Armstrong said he will include singers in some of their performances.

The Brooklyn Symphony Orchestra was started in Brooklyn Heights, this being the 37th year at St. Ann’s Church. “It’s not only the home of the orchestra,” Armstrong said. “it’s also the only place in the area that can fit us!”

Interested in becoming a part of the group? BSO  is always looking for new players– especially string instruments. After sitting in on a couple practices, prospective members can go through an audition process. Visit http://www.brooklynsymphonyorchestra.org/index.html for more information and the orchestra’s upcoming schedule.