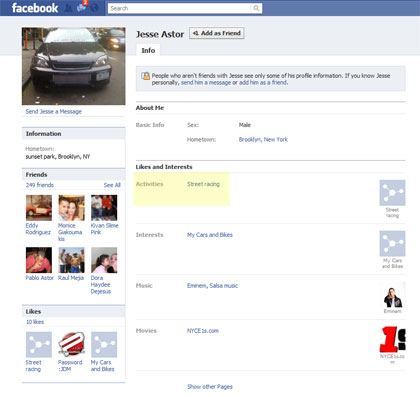 The Facebook page, reportedly belonging to driver Jesse Astor, lists "street racing' as one of his activities.

A 1999 Honda heading east on the Brooklyn-Queens Expressway at a high rate of speed overturned after it hit the median just before midnight. The driver, 25-year-old Jesse Astor of Sunset Park, was seriously injured, and his 21-year-old passenger was pronounced dead a short time later at Long Island College Hospital. Police determined that Astor was intoxicated above the legal limit, and took him into custody. He is charged with criminally negligent homicide, operating a vehicle while intoxicated, and speeding.

Updated on 10/4/10 with screen capture of Mr. Astor’s Facebook page.