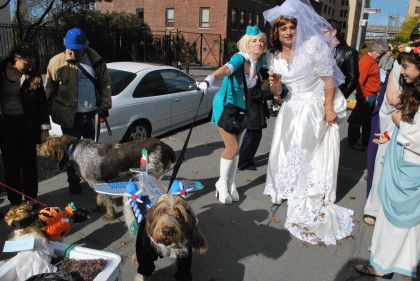 Don’t let the inclement skies get you down. It’s a bellwether for the new season, and the Annual Charity Howl-o-Ween Doggie Costume Parade/Contest is just around the corner!

It’s free to watch the parade if you don’t have a dog in this race. ;-)

Last year’s parade/contest had over 70 costumed entrants and attracted many amused neighbors, kids, gawking tourists and international news media on the famous Brooklyn Heights Promenade to watch the parade and costume judging.

The Howl-o-Ween parade is sponsored by Perfect Paws and Friends of Hillside Dog Park. For more info, contact Tom Vasquez at Perfect Paws: (718) 852-6200.