Poet John Ashbery to be Honored at Book Festival Sunday 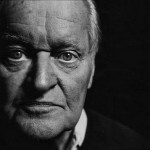 The distingushed New York poet John Ashbery will be honored with the “BoBi” award at this year’s Brooklyn Book Festival, to be held at Borough Hall Park this Sunday, September 12. At 1:00 p.m. Sunday, Ashbery and renowned Brooklyn novelist Paul Auster will have a conversation on the stage of the St. Francis College auditorium, at 180 Remsen Street, between Clinton and Court streets. Admission is free, but tickets are required, and may be obtained from the Brooklyn Book Festival information booths located on Borough Hall Park, beginning at noon on Sunday.

From the Festival’s press release:

Ashbery’s connection to Brooklyn and New York runs deep. His biography includes work as a reference librarian at the Brooklyn Public Library and co-director of the poetry MFA program at Brooklyn College. (He has also taught at Harvard and Bard College.) From 2001 to 2003, he was poet laureate of New York State.

“As a young poet I tried to imitate John Ashbery’s famous poem, ‘Self-Portrait in a Convex Mirror.’ I attempted to mimic his wit, keen observation, and linguistic invention,” said Brooklyn Poet Laureate Tina Chang. “Though my efforts failed miserably, I became a student of Ashbery’s by being an observer and reader. Generations of writers have been mentored and inspired in this way, by following his life’s work with remarkable fascination. His literary influence is a force of its own and his living legacy is undeniable.”

As a poet, Ashbery was particularly influenced by the American abstract expressionistic movement. He also worked as an art critic in France during the 1950’s and 1960s, and later in the United States. “My poetry imitates or reproduces the way knowledge or awareness come to me,” he told the Times of London. “I don’t think poetry arranged in neat patterns would reflect that situation. My poetry is disjunct, but then so is life.”

A full schedule of Sunday’s Book Festival events is here. A schedule of “bookend” events taking place Friday, Saturday and Sunday is here.