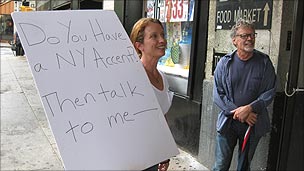 Brooklyn Heights resident/BHB contributor Heather Quinlan gets some more press attention this week for her NY accent movie If These Knishes Could Talk, this time from the BBC:

BBC: For the last year-and-a-half, Quinlan, a native New Yorker and film-maker, has followed the same routine for her first documentary, If These Knishes Could Talk.

The film, part comedic banter and part serious discussion, will not only bring a taste of the NY accent to audiences, but also examine how it’s changed as the city has changed.

Heather Quinlan, If These Knishes Could Talk