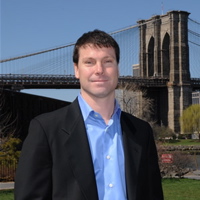 Ask State Assembly Candidate Doug Biviano about himself, and the first thing he’ll say is he’s a P.S. 8 parent who was born and raised in Brooklyn. Then, almost as if to prove it, he’ll ask the waitress at Heights Café to bring him a Brooklyn Brewery beer.

A Cornell grad, civil engineer, husband, and father of three, Biviano, 41, made a brief sojourn out to Colorado before settling down ten years ago in Brooklyn Heights. Now the superintendent at 169 Columbia Heights, Biviano, whose preppy good looks seem well-suited for a career in politics, recalled fondly his campaign for city council last year.

“It was exhausting, it was exhilarating, it was intense,” he said between sips of beer and bites of pizza. “The highs were really high, the lows were super low. Every mistake you make is amplified.”

Though he lost that primary race to Stephen Levin, who went on to win the general election, Biviano made a name for himself in the neighborhood, and even secured an endorsement from Rep. Dennis Kucinich. He’s hoping to capitalize on that reputation by running again for office, this time on the statewide level as he challenges the popular Assemblywoman Joan Millman for the Democratic nomination.

“The fix is in—they’ve perfected a system,” Biviano said, voicing the common complaint that 98 percent of incumbents seeking reelection return to Albany each election cycle. Not only does this “system” protect the incumbents, but in Biv’s view, it also hurts the people.

As an example, he pointed to a recent debate between himself and Millman, where Millman, who ascended to the Assembly in a 1997 special election, defended a colleague who had failed to disclose additional income he makes as an attorney.

“She should be defending us,” Biviano observed. 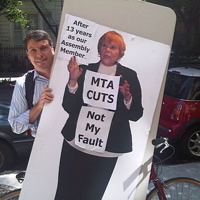 Another glaring flaw in his adversary: Millman, a former educator, is not only “double-dipping” he claims by receiving both her teacher’s pension and a salary for her position in the Legislature.  He also believes she lied in the debate by claiming she could not defer the pension payments, when in fact she can.

“Instead of Joan Millman setting an example, setting the bar…she’s at the core of what’s wrong with Albany,” said Biviano.

He’s garnered some attention of late for releasing a video complaining about the lack of media attention given those challenging “the bums” in Albany, as Biviano likes to call them. In fact, he noted that the Brooklyn Heights Blog was the only outlet to approach him for an extended interview.

With negligence like that, Biviano argued, “How do they expect anybody to throw the bums out?”

“How do you effect change? I think he’s struggling with that,” Biv said of Squadron. “He could potentially become a target because I think he truly wants to reform Albany. I’d like to work with him.”

In Biviano’s opinion, the biggest problems facing the 52nd Assembly District he hopes to represent are the economy; the MTA’s budget cuts; the development of Brooklyn Bridge Park; and the lack of middle school options in the region. He favors term limits for local politicians (“Eight to ten years seems reasonable,” he said), and is open to the idea of residential parking permits. 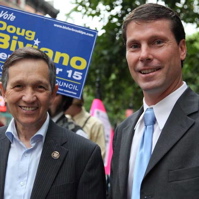 Biviano with Kucinich in 2009

On his website, Biviano lays out his plan to fix the MTA by refinancing its long-term debt and saving more than $700 million a year in interest. He also pledges to eliminate corruption in Albany by way of “active representation of the people,” and by forcing all elected New York State and New York City elected officials to fully disclose their income.

Admittedly apolitical prior to 9/11, Biviano was stirred to attention by what he realized was “a systematic failure of leadership we have in our governments.” He believes everybody needs a good dose of civics, and that getting involved in the political process can be empowering.

Having secured his spot on the primary ballot on September 14, Biviano promised he’d be a politician people could trust. “I am beholden to nobody,” he said. “I can go up there with complete independence.”

And this might be his last shot; Biviano has no plans to run for public office again. “Not if my wife has any say,” he added, leaving the door open, of course, as any good politician should.