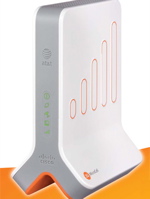 Thanks to the lovely folks at AT&T (and to my incessant whining), I was provided a nifty and futuristic MicroCell device that works like a mini cell tower in my apartment to boost the signal on my phone (and hopefully not cause all kinds of cancer). While my phone now displays four bars at most times, it’s not infallible and dropped a call last night. But unlike my pre-MicroCell existence, reception was excellent prior to said dropped call.

As for improving service for people who do not live in my apartment, AT&T’s Ellen Webner said the company is “readily aware we need to enhance the coverage.” She emphasized that service issues in New York City are not for lack of funding or resources. “New York City is the top priority of the entire company as far as wireless coverage and performance,” she added.

But it’s not as simple as merely building a cell tower to improve the signal; AT&T actually has no towers in the city, relying instead on equipment placed on the rooftops and sides of buildings. Getting co-op boards and landlords to agree to install this equipment can be tricky business, especially in a historic district like Brooklyn Heights.

To that end, AT&T has ways of camouflaging the equipment so that it blends in with the architecture.  “We have antennas on the Flatiron Building in Manhattan,” said Webner. “But nobody would ever know.”

She owed that there is more traffic on the AT&T network than ever before, but that they are making aggressive changes to ensure better results for customer. To their credit, I have noticed that my iPhone now works much better in Manhattan than it did last year.

It remains to be seen how and when cell phone service in Brooklyn Heights will improve, if at all. AT&T insists they are working on the problem in the area, and maybe in time the signal will improve and we can all dance together in the streets while making millions of uninterrupted cell phone calls. For now, however, my advice for the afflicted would be to get your hands on a MicroCell, and hope for the best.