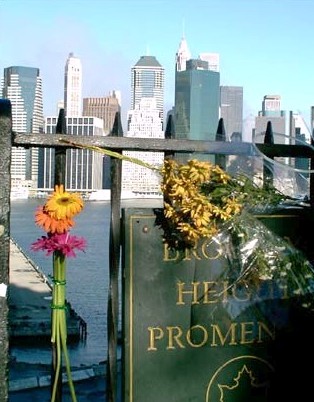 Now through Monday, the City, Brooklyn and the neighborhood offer many ways to reflect on the 9/11 attacks five years later.

Go Brooklyn on Brooklyn Museum's "Looking Back From Ground Zero

In the neighborhood, The First Presbyterian Church (24 Henry Street) will conduct a "multi-faith Vigil of Reflection and Rememberance" on Sunday (9/10) starting at 7:30 pm. Grace Church will hold 5 pm "Service of Prayer and Rememberance". In addition, special prayers will be offered at all services. On Monday (9/11) The Great Litany will be prayed at noon.

Our own FDNY heroes, Engine Company 205 / Ladder Company 118 "Fire Under the Bridge", lost 8 men that day including 6 who died together in their firetruck under the rubble.  The photo of their recovered vehicle was one of the most poignant images of the attack's aftermath.

Please take a moment to remember these men who made the Ultimate Sacrifice: