By Claude Scales on April 13, 2010 9:47 am in Environment, Government, Transportation 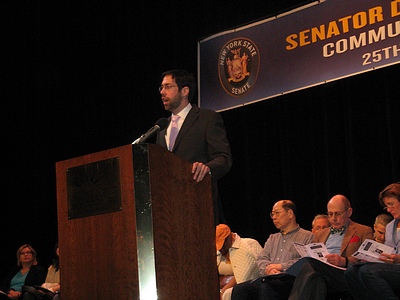 In the opening remarks at his second annual Community Convention, held Sunday afternoon at Borough of Manhattan Community College, State Senator Daniel Squadron noted the changes that had occurred since his first Convention just over a year ago. The first Convention occurred at a time when, despite the economic crisis, many people felt encouraged by the inauguration of a new President and, in New York, by the Democratic Party’s having acquired control of the state Senate after many years in the minority. Shortly after, however, the Democrats temporarily lost control of the Senate, and Albany once again became gridlocked. Since then, developments at both the state (despite the passage of some ethics reforms) and federal (especially the protracted fight over health care) levels have made many people more cynical about politics and government. Squadron noted, however, that his preliminary count of attendees this year showed that as many people showed up as for the first Convention.

Following the Senator’s opening remarks, the audience scattered through the labyrinthine BMCC building to rooms where sessions on particular topics were being held. Your correspondent chose the session on “quality of life” issues. The moderator for the discussion began by asking everyone to introduce themselves and state what issues they wanted to discuss. The group proved to be diverse, including, for example, nightclub and restaurant owners as well as community residents concerned about crime and noise. I identified myself as living in Brooklyn Heights, and said I was interested in discussing solutions to the helicopter noise problem. Another man, who lives on the Manhattan side near the South Street Seaport, said he was also very concerned about this issue. A third attendee noted that, in addition to noise, helicopters also posed safety and security concerns.

Other issues discussed in the quality of life session included disruption and safety issues connected with construction, street closures and traffic, and film shoots. Lack of planning, as well as failure of city agencies to coordinate properly, were blamed for many problems. “If only existing rules were enforced” was an often heard refrain. Senator Squadron joined the group and listened briefly.

BHB contributor T.K. Small also attended the convention, and went to the session on transportation. He gives this report:

I sat in on the transportation session. Our group was fairly lively and the conversation was interesting. People were very steamed about the upcoming cuts to various bus lines (including me, as I use the B 51 frequently). At issue moment in the conversation, we got sidetracked into a “blame the unions” diversion. This was kind of funny in light of the presence of a Transit Workers Union representative. The union rep blamed everything on the MTA board. Some of the more substantive suggestions related to discussions concerning dedicated funding streams, such as, congestion pricing, a commuter tax, gas tax (from me), corporate sponsorship of stations and bonding. The other major topic of our group generally was in trying to make the cuts more equitable. Also, Sen. Squadron came by and joined us for a few minutes as well.

Following the breakout sessions, we went to a reception, at which Senator Squadron spoke again, then introduced U.S. Senator Chuck Schumer, who talked briefly about accomplishments in Washington, especially health care. He also mentioned the helicopter issue, and said he was in communication with the Federal Aviation Administration about this matter.

Word On The Street at 75 Livingston
Mr. Junkersfeld’s Brooklyn Heights is Looking Up