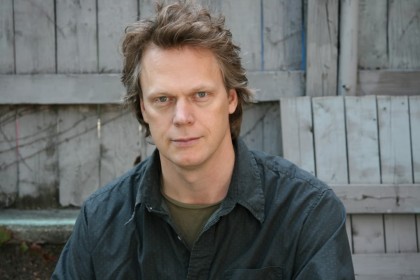 On Saturday morning, BHB had the opportunity to chat with Boerum Hill resident/Brooklyn Heights based novelist, playwright and filmmaker Peter Hedges.   His credits include the novel and the screenplay What’s Eating Gilbert Grape, writer-director of Pieces of April and Dan in Real Life as well as an Academy Award nomination as co-writer of the screenplay for About a Boy.  His third novel, The Heights, goes on sale this Thursday (3/4).

The Heights is the story of Tim and Kate Welch and what happens the year Kate goes back to work and Tim, a history teacher at the prestigious Montague Academy, takes a year sabbatical to watch their two young sons. Add a charismatic new neighbor and a newly famous old lover and The Heights proves a smart, witty and thoughtful meditation on family, fidelity and The Magic Kingdom. 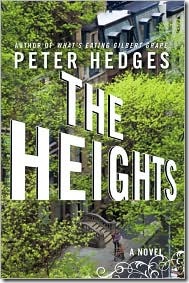 Although the main characters of The Heights live on fictional “Oak Lane” and Tim is a teacher at “Montague Academy,” a tony private schooled housed in a “neo-Gothic, Ex-German Lutheran Church”, many Brooklyn Heights residents wonder if  the book is based upon actual events.  Despite the made up cornerstones, scenes are set at some very real places such as Siggy’s, Tazza and Jack the Horse Tavern.  Hedges says that if he wanted to write a story based upon real life he would write a memoir.  But rather than creating what he says would be a “sleep aid”,  he chose the more enthralling story of The Heights as seen through the eyes of Kate and Tim, and how they deal with the challenges to their otherwise harmonious marriage.

And while this is Hedges’ first work set in a big city, he adds that he felt comfortable using Brooklyn Heights and surroundings  as a backdrop because it has a small town feeling.  He knows more of his Brooklyn neighbors than he has in other places he’s lived, and appreciates the cultural diversity of living in Brooklyn as opposed to Los Angeles, where everyone he meets is in the entertainment industry.

Hedges, who has an office on Montague Street, recently started a blog. In one post he tells the story of his childhood neighbors in Iowa, the Silversteins.  Twins Larry and Lee were great athletes and consistently beat young Hedges in all sports. However, the author quickly learned that getting beaten by superior players like the Silversteins made him a formidable competitor to lesser talents.  “When you play with the Silversteins, be prepared to lose. You’ll lose most of the time. But you will get better.”

When I was eight-years-old and in the third grade, the Silverstein twins were in fifth grade. One day Lee and I were playing Ping Pong in their basement. Most likely, Lee was winning. While we played, I told him a story I’d made up. He liked my story and told me I should write it down. But I didn’t like the physical act of writing. I was left-handed and had hard-to-read penmanship. We played on.

Later that afternoon, Lee knocked on my front door. He’d brought along notebook paper and a pencil. In our living room, Lee knelt at our coffee table and told me to slowly re-tell my story. And as I did, he wrote down my story word for word.

You see, if Lee Silverstein thinks you’re a writer, it must be true.

As for parents who may have a budding writer at home, Hedges shares two anecdotes about his parents.

The first is about this minister father, Robert, who had a bit part as a minister in the film adaptation of What’s Eating Gilbert Grape. which Hedges also directed. While getting his makeup done the elder Hedges shared a story with the then teenaged Leonardo DiCaprio. He told the young star that he thought his son’s ambition to become a writer was crazy. That was the first time Peter had heard his father’s opinion about his career choice and it was happening during the production of a movie based upon his novel.  In other words, he only found out the truth after he became successful. The author says his father did the right thing by not discouraging him in his youth, and that parents today should follow that example. After all, if it’s a bad idea or the wrong thing to do, real life will do the discouraging.

While Hedges received his father’s tacit encouragement by his keeping his skepticism at bay, he received his mother’s via a project she was working on. A drug and alcohol counselor, she was writing a book titled You Have My Permission at the time of her death ten years ago. She learned in her years of counseling that all people want is the permission to pursue their dreams. That’s also great advice for parents, says Hedges.

This Thursday (3/4), Hedges will be reading from The Heights at Book Court in Cobble Hill to celebrate the novel’s official release date.  He’ll do another reading on Monday (3/8) at Barnes and Noble (2289 Broadway, Manhattan) before embarking on a national reading tour ending in his home state of Iowa in mid-April.

Sam O’Hare’s “The Sandpit”: a Revelation
New Neighbor: Something at 139 Atlantic