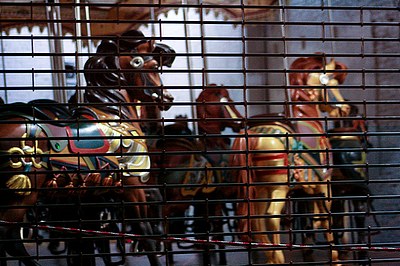 “Jane’s Carousel”, the 1920s vintage merry-go-round restored under the auspices of Jane Walentas, wife of developer David Walentas, and now housed in a building on Water Street in DUMBO, is slated to be moved across the street and into what is now Empire-Fulton Ferry State Park, itself to be incorporated into Brooklyn Bridge Park, sometime within the next year. The carousel is to be covered by an enclosure designed by Jean Nouvel, the cost of which will be paid by Walentas. However, not everyone is happy with this arrangement, as this story on the New York Post’s Brooklyn Blog reports:

A state plan to relocate an exquisitely restored 1920s carousel to popular waterfront parkland in DUMBO is infuriating local civic groups, who say it’s a bad fit that isn’t worth losing trees and lawn space over.
…
Doreen Gallo, executive director of the DUMBO Neighborhood Association said “We all love the carousel; we just think it belongs in another part of Brooklyn Bridge Park.”

Other groups named as opposing the siting of the carousel are the Brooklyn Bridge Park Defense Fund, the Fulton Ferry Landing Association, and the Vinegar Hill Association.

Brownstoner and Curbed also have posts about this controversy.