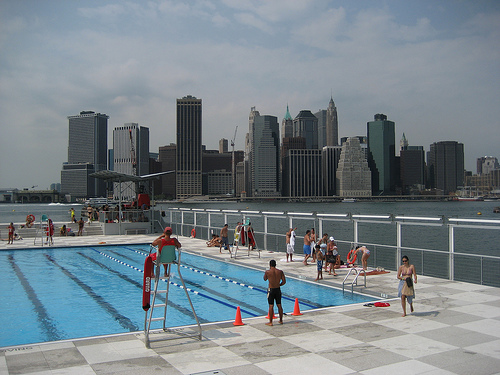 This weekend is your last chance to enjoy the Floating Pool Lady in the nabe — next year she moves to the Bronx.

New York Post: Boros to Pool Around: The new floating pool has been such a huge success on the Brooklyn Heights waterfront this summer the city plans to tow it elsewhere next year to give another neighborhood a chance to enjoy it, officials confirmed yesterday.

But Brooklynites who got used to the pool and beach – with its panoramic harbor views – want it to stay put.

"We've been waiting for Brooklyn Bridge Park for decades, we finally get a taste of it and now they want to take it away?" said Lauren Sheridan, a 29-year-old dance teacher from Park Slope.

"It makes no sense. It's the coolest thing, and it's a lot closer for me than heading out to Coney Island."

Swizzle and Fink in Feud
No Nosferatu for Nabe Thesp