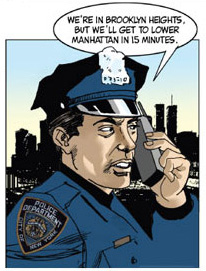 Slate has begun excerpting Sid Jacobson and Ernie Colón's The 9/11 Report: A Graphic Adaptation.  In light of the the administration's almost surreal actions before and since the attacks,  it's strangely appropriate for the commission's findings to be outlined in this medium.

However, as the tragedy's fifth anniversary approaches, it's an opportunity to leave politics "at the door" and acknowledge the countless acts of heroism that occured that day. That point is even more poignant in Brooklyn Heights were many watched the horror unfold from the Promenade, while New York's Finest and Bravest rushed to the scene via the Brooklyn Bridge and other crossings.

Earlier this month the San Diego Union Tribune wrote a story about the book while the duo were in town for the ComicCon convention:

Colón told The Washington Post he got the idea for the graphic adaptation when he found out the report was in the public domain. He said the adaptation should help attract a new audience for an important subject, telling the paper, “There are going to be a whole bunch of kids, teenagers and adults that will not read the report.”

Jacobson is a big fan of the original 568-page report, in addition to his and Colon's 144-page adaptation of it. He said he was surprised to see many stories come out that “The 9/11 Commission Report” already dealt with. “There are so many things that are in the report that have been presented to us in the last two or three years as new news,” he said. “It all came from the report.”