The Boat May be Rockin’ but Inside it’s All Swing

By Alex Simmons on December 19, 2009 11:51 am in Arts and Entertainment, Brooklyn Heights, Events, Nightlife

The Mark Soskin Trio is one of the many accomplished music groups you will find performing year round at Bargemusic.

At first glance this floating white barge seems an unlikely place for a night of Jazz.  But make no mistake, Bargemusic is a great place to hear some very talented musicians here in Brooklyn Heights.

Founded by Olga Bloom in 1976.  Bargemusic is committed to enhancing New York’s cultural life with year round chamber music performances. Thursdays are Jazz night down at Bargemusic, now in it’s thirty-second year.

Formerly a transport for coffee beans in 1899, bought by Bloom and turned into a floating concert hall.  The interior of the barge was made by salvaged wood from the scrapyards of the Staten Island Ferry.  The wooden interior is a perfect choice, the acoustics of this ‘floating concert hall’ are amazing. 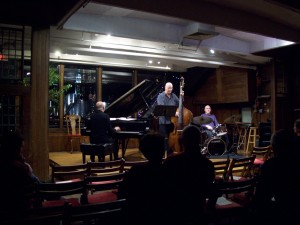 Paul Nidenberg, a longtime fan of the Mark Soskin Trio calls Bargemusic an “incredibly underutilized resource”.  As we talk in between sets he mentions the Brooklyn Bridge Park Development project saying “as this water front is finally getting used, maybe these guys [Bargemusic] will get some more exsposure.”

The Mark Soskin Trio consisting of the former on piano, Jay Anderson on upright bass, and Adam Nussbaum on drums, has been playing together on and off for the last five years.  They have released a new album ‘The Man Behind the Curtain’ with Kind of Blue Records which is available on their website www.marksoskin.com.

The band playing at the front of the barge, the Manhattan skyline bobbing up and down behind them.  This writer can think of many reasons to check out this and future seasons of Bargemusic, but certainly no excuses to miss it.