By Homer Fink on August 31, 2006 7:00 am in Development, History, Landmark Preservation 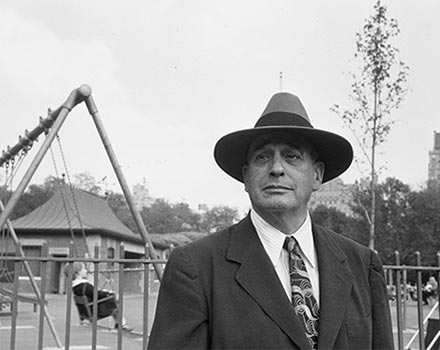 To some Robert Moses was the most brilliant urban planner who ever lived. Others will argue that Moses’ cold and wreckless vision stymied beauty and fostered the urban blight of the mid-twentieth century.

Among his accomplishments, Moses built the Belt Parkway and replaced Brooklyn’s shorefront towns with horrific high-rise apartments worthy of the Eastern Bloc.

His 1947 master plan for the BQE would have cut through Brooklyn in a manner similar to his borough hacking construction of the Cross Bronx Expressway proposed at about the same time.

Moses succeeded in destroying a portion of Hicks Street by laying down his 6 lane highway through Red Hook.  He met with little opposition from the poor, immigrant Italian community there who feared retaliation — or worse, deportation — from City Hall if they protested.  “(Moses) could have run it down Van Brunt Street by the water, but he didn’t,”  resident Camille Sacco told Newsday.

Here in Brooklyn Heights, more affluent and influential residents were able to persuade Moses to accept a compromise — one with roots dating back to Hezekiah Pierrepont’s plan in the 1820s to build a vista point near the water to rival Manhattan’s Battery. (Note: One of Moses’ other proposals was the Brooklyn Battery Bridge, a project that would have destroyed Battery Park.  The plan was thwarted by FDR and the Navy who claimed that a bridge in that location, if bombed by Axis forces, would completely block the East River.  In its place, the bridge became the Brooklyn Battery Tunnel.)

Robert, Why Does It Have To Be So Big?
Comic Book Rabbi Comes to Heights