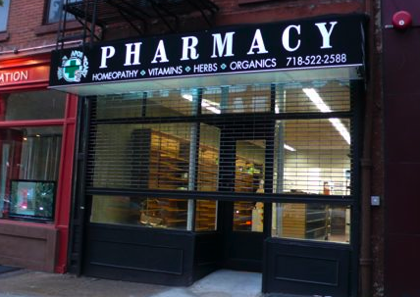 Last week, Brownstoner brought attention to a new pharmacy opening up at 79 Atlantic Avenue. Readers commented on the actual pharmaceutical aspects to the pharmacy, claiming that it wasn’t a true pharmacy since it didn’t list such characteristics on its sign, a sign which another reader suggested was in violation of landmark rules. We just spoke to an employee of the new pharmacy – which is still “in the process of opening,” but officially opened for business yesterday – and verified that it is, in fact, a full-line pharmacy that carries prescription medicines, but has an emphasis on natural health (vitamins, herbs, natural supplements). As far as the landmark rules go, the employee said they are well aware of area regulations and is confident that the owner chose signage that is not in violation of any regulations.