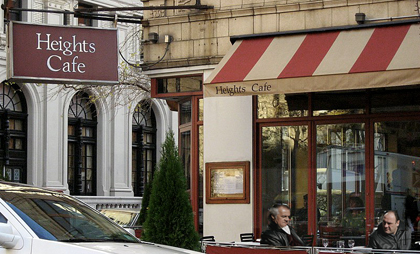 In his column in this week's Brooklyn Paper BHB publisher Homer Fink takes a flight of fancy… Sopranos style:

Brooklyn Paper: Sopranos Fan Waits for Tony: Millions of fans of “The Sopranos” went to bed on Sunday night feeling a little unsatisfied. Did Tony get whacked or was he faced with a different crisis — choosing between the burger or the steak? While existential nuance may tickle the fancy of drama students, “Sopranos” mavens wanted more Scorsese and a lot less Sartre.

The loose ends in the finale tell us that no story, no matter how great, ends with everything tied up neatly. But no one who has lived in Brooklyn Heights needs a TV show finale to tell him that. (Don’t we all wish we could tie up the loose ends in this neighborhood: Brooklyn Bridge Park, the Clark Street elevators, the BQE cantilever project, dopey drivers in the Brooklyn Bridge bike lane?)

Face it, that Schlitz you hurled at the television Sunday night was not entirely fueled by anger at the “Sopranos.” It was also fired up by excess double-parking, threats of congestion pricing, Astroturf in your park and the fact that you can’t get a decent meal without food poisoning on Montague Street. Not to mention the long lines of tourists at Grimaldi’s. Can’t a guy get a pizza without so much drama?

With that much pent-up it’s no wonder why not knowing Tony’s true fate would drive a man to — hallucination. A combination of that lack of closure, urban dread and some spicy meatballs got me dreaming about what really happens to the Jersey Capo, suggesting that maybe we need a little “Sopranos” in our lives:

Now that he’s made peace with the New York family, Tony has branched out to Brooklyn. “Good idea, Tony,” Paulie says. “I saw the Virgin Mary at the Fruit Street Sitting Area once.”

Tony pulls his SUV around the Brooklyn Bridge bike lane, flips off a bicyclist and begins searching for a parking spot on Henry Street. He’s cranking Bob Dylan’s “Tangled Up in Blue” on the stereo. Not long after rolling into the Heights, he realizes that street parking is futile and parks in the Henry Street garage.

Tony stops at the Busy Chef for a cappuccino. He likes the place. Two days later, the scaffolding that has been plaguing business for years is gone. “It’s good to have friends,” he tells Chef Dan.

In a futile search for a nice cappicola-and-peppers hero, Tony strolls along Henry Street, and notices an empty storefront — the former home of Q Photo. With a couple of calls, Soprano arranges for a pork store to open in the vacant space. Clearly, the high Heights rents won’t deter his desire for a satisfying lunch. He ponders turning the Brooklyn Heights Cinema into a strip joint, but a call from a certain blog publisher interrupts his train of thought. “Casino? I gotta check that out,” he says.

On Montague Street, Tony walks into the Heights Casino. Since his luck has turned good again, he’s always looking for action. He’s disappointed to observe only bankers in white shorts playing racquetball. Not a craps game or blackjack table in sight. He resolves to “fix that problem” and heads closer to Downtown. At the corner of Willoughby and Bridge Streets, Tony picks up a hot coffee and doughnut at the Broadway Bakery. On the way out, he sees a vision — the Belltel Lofts. At first he thinks the tingly feeling washing over him is a panic attack. However, that warm fuzzy glow is one of sheer joy. Downtown Brooklyn is undergoing a renaissance. And with rebirth comes the need for sanitation, construction, spare parts, general contracting and other opportunities. “Somebody up there likes me,” he says to himself.

With the day almost done, Soprano makes his way to a sit down with some business associates but notices some Brooklyn Law students playing on the indoor bocce court at Floyd NY and a Lexus parked crookedly outside. He walks in and buys a round of drinks for his daughter Meadow and her classmates.

Outside, Tony sees me and says, “Well, shall we go?”