Film Shoot on Remsen: Is it Really So Strange? 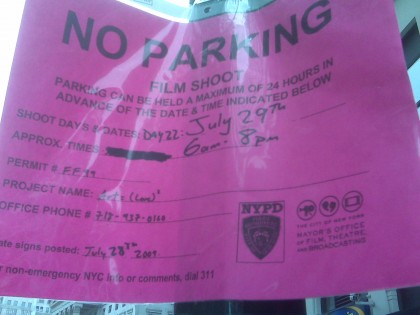 Nabe blogger Brooklyn Beat ponders what the heck a film shoot on Remsen Street today is really all about:

Brooklyn Beat: As I walked home from the gym this morning, I noticed a NO PARKING sign from the Mayor’s Office of Film, Theatre & Broadcasting stating that there was to be a film shoot (Day 22 of filming of said project) on Remsen St. between Court and Clinton today, July 29th from 6am- 8pm. The project name is listed as “Art = (Love) 2″. Through my meticulous internet research I’m afraid I’ve fallen short and can find no information regarding this film or the shoot. What’s even stranger is that I walked by the proposed “set” at 11am and still there were no trailers set up or sign of a film shoot of any kind. Does anyone have any news or info they can contribute?